Montae’l, at the age of 21, has been elected as the youngest serving alderman (city council member) for his hometown of Holly Grove, Arkansas.

Montae’l previously served his city of Holly Grove as an intern in 2019 when he worked with the mayor to receive a $50,000.00 grant to build a new park for the youth in his community. Later, he served as the City Project Liaison, communicating the projects taking place within the city to the constituents, and even worked in the city’s water department. He also co-hosted a city voter registration and census booster rally. According to Arkansas state law, as officers and officials of their city, members of the city council enact ordinances and bylaws concerning municipal affairs that are consistent with state law in order to promote the health, safety, and welfare of their constituents and the general public. They also assist the mayor with management and regulation of city finances, salaries for city officials, fire and police department governance, costs of city utility services, etc.

Montae’l is a senior English/Pre-Law major and a true servant-leader – having served as the 89th SGA President. He is also a member of the Tougaloo College Pre-Alumni Council and serves as the 2022-2023 UNCF National Pre-Alumni Council (NPAC) Southwest Regional Director.

The Fall 2022 Edition of the Tougaloo Alumni Bulletin (flipbook) is now available at TAB Online.

Congratulations to the Hall of Fame Class of 2022 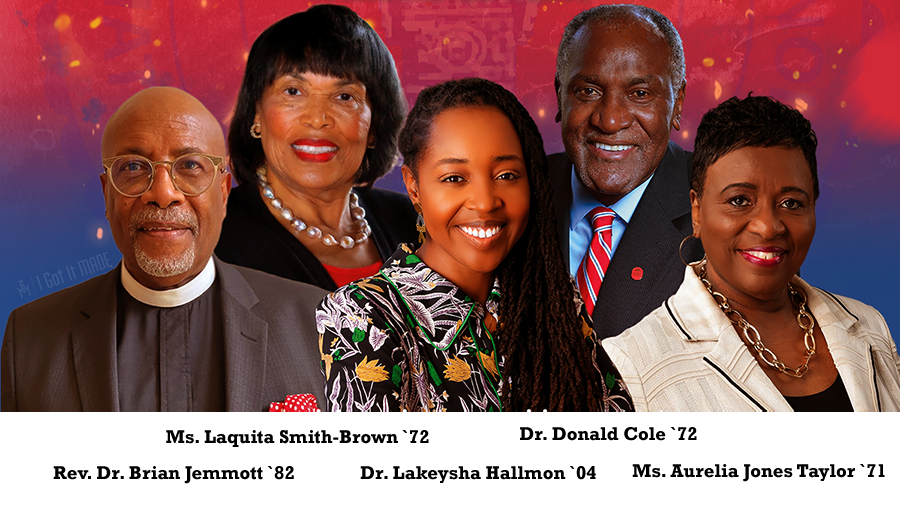 Shirlethia Franklin '04 Named to Bloomberg Law's "They've Got Next" List Jones Day partners Shirlethia Franklin and Alexandra Wilde have been named to Bloomberg Law’s “They’ve Got Next” list. The lawyers included in Bloomberg Law‘s annual recognition are profiled as “the next generation of lawyers assuming leadership roles and scoring wins for clients right now.”

Shirlethia Franklin is based in the Firm’s Washington Office and is a partner in the Business & Tort Litigation Practice. A former senior U.S. Department of Justice official, Ms. Franklin handles disputes involving the federal government and litigates complex, high-stakes civil cases across a broad range of jurisdictions and industries. She is currently defending a major retailer in nationwide civil litigation brought by state attorneys general and municipalities concerning the distribution and sale of prescription opioids, and a global biopharmaceutical company against claims concerning its insulin pricing practices.

Ms. Franklin recently led an ad hoc board committee of the Lawyers’ Committee for Civil Rights Under Law, conducting an extensive evaluation of Ketanji Brown Jackson, then-nominee to the Supreme Court of the United States, and producing a report recommending confirmation by the U.S. Senate. In late 2021, Ms. Franklin was appointed by President Joseph R. Biden, Jr. to serve as a member of the President’s Commission on White House Fellowships. Commissioners are responsible for recommending a group of candidates to the President for selection as White House Fellows, one of the nation’s most prestigious programs for leadership and public service. Ms. Franklin was a member of the 2013-2014 Class of White House Fellows. In 2020, she served on the Department of Justice Agency Review Team for the Biden-Harris Transition and was recognized by the National Law Journal as a “D.C. Rising Star” and by the Washington Business Journal as a “40 Under 40” honoree.

In addition to successful client representations, the lawyers on Bloomberg’s list are also recognized for establishing early ownership of key roles; leadership skills; pro bono service to their communities; displaying new ways of thinking about their legal practices through innovation or thought leadership; and demonstrating tangible support for, and participation in, diversity and inclusion efforts.

The Pay It Forward Birthday Challenge Results Are In!

Who will claim the Bragging Rights for 2022? Congratulations to Team 2 ( April-June) for the highest number of donors and Team 4 (Oct-Dec) for the largest donation! The Pay It Forward Birthday Challenge (igfn.us/form/HXGaAg) and Dollars for Scholars Campaigns (igfn.us/form/ibbmKQ) collectively generated $11,217 in approximately six weeks through TCNAA efforts to increase the alumni participation percentage. Supporting our Eagle Queen is year-round. The fundraising links are now open for the 2022-2023 fiscal year. Thanks for being the difference! 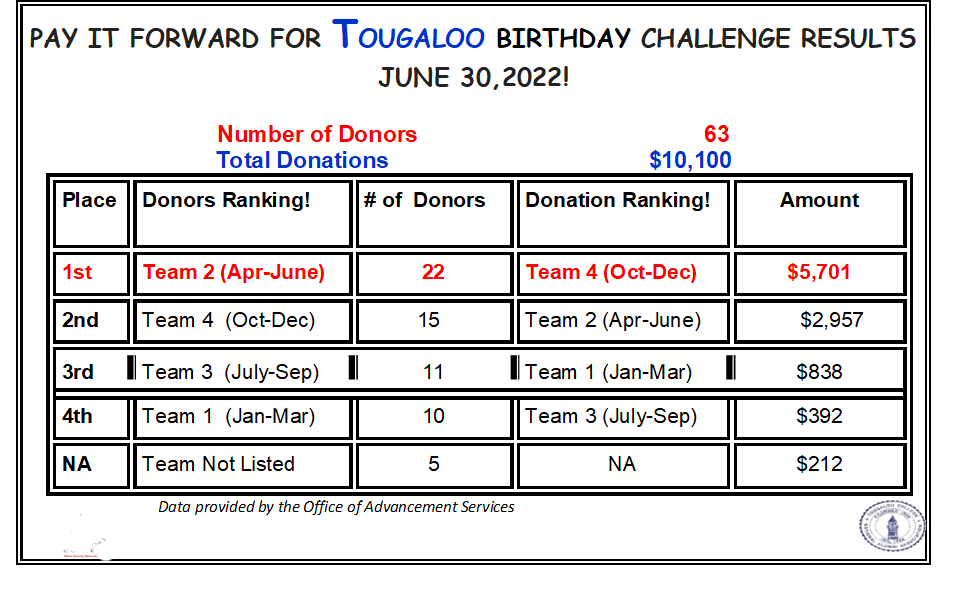 Tougaloo College is committed to providing students the opportunity to transform their lives through higher education. TCNAA supports this mission to obtain needed funds to ensure that students not only have the opportunity to study at Tougaloo, but that they persist to graduation and ultimately achieve career success in their respective fields as many have done before them.

Tougaloo College offers a variety of ways to give. Through scholarships, planned giving, reunions and other opportunities. Your gift will help the Eagle Queen to continue soaring to new heights. We invite you to explore the many ways by clicking the link:  https://www.tougaloo.edu/give-today/

TCNAA Subscribing Life members can now obtain their installment history and remaining balance via their member profile page by following the instructions on the Membership Status and Update Request page at https://tcnaa.org/membership-status/. The payment information in the profile is read-only, to make changes or resolve disputes it will be necessary to provide documentation to the Membership committee via the Administrative Assistant (admin.assistant@tcnaa.org) or Web Administrator (admin@tcnaa.org).

Shop for Branded Merchandise at the TCNAA Online Store

Make a Donation to TCNAA

Mark your calendars for Thursday, October 13, 2022 and join Tougaloo College for our 2022 Giving Day—One Day, One Tougaloo! Our goal is to raise over $100,000 in just 24 hours in an online, social media driven campaign that will benefit our deserving students. The success of Giving Day 2022 is powered by YOU! Watch the video to hear from Tougaloo College President, Dr. Carmen J. Walters, and students on the importance of One Day, One Tougaloo. Help spread the power of giving by using our hashtags on social media, #TougalooGives and #OneDayOneTougaloo or visit https://www.tougaloo.edu/give22.