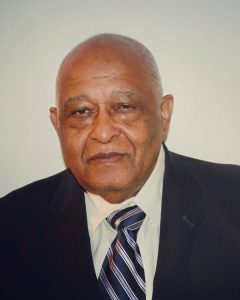 Wroten McQuirter, Jr. graduated from Sumner Hill High School in 1965 as a straight “A” student and was class president. In high school, he entered chemistry competitions at the state level under the direction of his chemistry teacher, Mr. James Ratton who encouraged him to conduct experiments. McQuirter made distilled and purified alcohol as well as matches from white phosphorus. His experiments with white phosphorus took him to the Mississippi State Science Fair.

McQuirter graduated from Tougaloo College in 1969 with a BS in Chemistry. At Tougaloo, he became a student research assistant while studying Chemistry under Dr. Al Schlueter. McQuirter tutored chemistry students and worked with a research team that published Semi Empirical Molecular Orbital Calculation papers and presented the findings at the Southern Chemistry Society conference. There, McQuirter was exposed to complex topics including “molecular orbital calculations.”

He earned a Master of Combined Science in Chemistry degree from The University of Mississippi Medical School. Dr. Robert Smith helped him to get accepted into Meharry Medical School in 1971. McQuirter excelled, finished in the upper fifth percentile of his class, and received an invitation to remain as a surgical resident, which he accepted and completed in 1980. McQuirter established and ran his private practice from 1981 to 1983.

In 1983, he received an academic fellowship in Thoracic and Cardiovascular Surgery at Baylor Hospital, Dallas campus, where he studied and practiced with Harold Clifton Urschel, MD., who developed and performed cutting-edge surgical procedures that influenced new standard practices in the Thoracic field and which led to worldwide recognition. McQuirter recounts, “Dr. Urschel was, by far, the most challenging boss I have ever encountered.”

Next, McQuirter focused his energies on Emergency Medicine, which was an upcoming area of specialty. He consequently served as an Emergency Room director in Virginia, Minnesota, Tullahoma, Tennessee, and Illinois until 2019, which brought him back to doing what he knew best, “patient care including emergency room care.”

McQuirter joined a medical mission through his church and served in Jamaica one week a year for eight years. This work enabled him to deeply understand the biblical passage, “The poor you have always.” McQuirter felt blessed to provide his service and give of himself. He found excitement and joy being able help people. Because medical tools and supplies were often in short supply he had to “make do” with what was available. “My reputation grew, and people came to the medical mission.” He saw patients he had treated five years prior. Some wounds had reoccurred while others were new. As a certified wound specialist, McQuirter would often repurpose home products as medication/medical equipment. The kitchen was his best friend or a small pharmacy. The people knew that Dr. McQuirter would fix their legs or whatever ailed them. “For me, it was just fun,” Wroten recalls.

McQuirter’s son, also a medical doctor, operated a private practice. One day, a Jamaican man came to his office looking for McQuirter. His son Julian McQuirter, M.D., tried to tell the gentleman, “Sir, his name is McQuirter.”
The man replied, “Your name is (he spells the last name) Dr. McQuirter?”
“Yes sir. Why do you say you are not Dr. McQuirter? Have you been to Jamaica?”

In the end, the gentleman had hoped that Julian would go into the kitchen and make him some medicine and fix his leg as he had done in Jamaica. Unable to convince the man, he had to find medications in the sample room to treat him. McQuirter’s son later told him how his past had landed on his door.

McQuirter is a life member of the Tougaloo College National Alumni Association, and founding sponsor of the Katherine Murriel Education Fund, Inc.