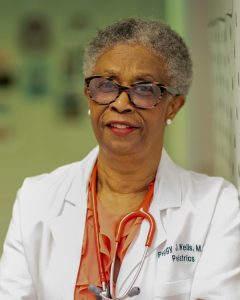 Peggy Johnson Wells Howard has always had indelible clarity regarding her career goal and the pathway to its attainment. Peggy first entered the hallowed gates of Tougaloo College in the summer of 1965 for participation in the Summer Science Program. Upon graduation, with honors, from Simmons High School in Hollandale, MS the following year, she returned to Tougaloo in August 1966 to begin her journey to becoming a medical doctor and specifically, a pediatrician. In 1970, Peggy graduated from Tougaloo with honors and enrolled in the University of Mississippi (UM) School of Medicine. She entered the annals of history as the first African-American female graduate of the UM School of Medicine.

Upon graduation from medical school and with completion of a pediatric residency at the Mississippi Children’s Hospital, Dr. Wells and Dr. Mangrem were recruited to Clarksdale, MS to provide newborn high-risk care. This resulted in the establishment of the Children’s Clinic of Clarksdale, the first bi-racial medical practice in the state of Mississippi at that time. Four decades later, this clinic is thriving as the primary pediatric healthcare provider in the northwest region of Mississippi. Further, for the past five years, Dr. Wells has been the singular medical practitioner.
In addition to being a selfless medical provider, Dr. Wells is also an engaged professional, a published scholar, and community servant. Her service extends beyond the state of Mississippi and spans generations. One of her most notable professional contributions has been serving as a member of the advisory board for the organization and development of the Children’s Health Insurance Program, better known as CHIP.

As a means of addressing the underrepresentation of minorities in health careers, Dr. Wells has utilized her clinic as a site for the training and mentoring of future medical providers. Specifically, the Children’s Clinic of Clarksdale is a site for Coahoma Community College Associate Degree Nursing (ADN) students engaged in clinical rotations. The Clinic also participates in numerous job shadowing programs such as Tri-County Workforce Alliance, local high school job readiness, Bushel of Books, and scholastic early literacy programs. Three years ago, her daughter and a few of her friends started a book-club, Reading Between the Wines, to foster positive relationships among African American women in Clarksdale and engage in meaningful literary dialogue. Dr. Wells’ appreciation for the arts encouraged her to agree to allow her practice to be a home for the mini library donated by the book-club and supported by the community. The mini library has received hundreds of donations, which Dr. Wells distributes to patients free of charge.

Dr. Wells’ recognition at the national, regional, and local levels is a testament to her professional and community engagement along with her service as a pediatrician. Select awards include the NAACP Image Award, Northwest Mississippi Regional Medical Center Doctor of the Year, and the National Health Service Corp Commissioned Officer Award. She is actively engaged as a volunteer in her community and church. In 1967 she became a member of the Gamma Psi Chapter of Delta Sigma Theta Sorority, Incorporated.

Peggy has a spirit of generosity and is a sustained benefactor of her alma mater, Tougaloo College. She is the wife of Roosevelt Howard and they have a blended family of six children and a host of grandchildren. Her family of origin includes three parental figures: the late Ruby Johnson Mills, the Rev. E. L “Daddy” Rogers and Louise Rogers. Dr. Wells is one of nine siblings.