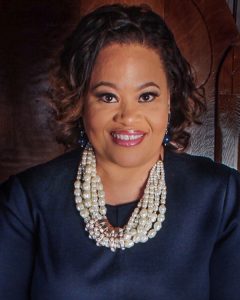 Dr. Candice Love Jackson has brought an abundance of positive effects to the humanities in the state of Mississippi. Born in Pontiac, Michigan, during the post-Civil Rights Movement, she has valiantly carried forth the tradition of academic excellence instilled in her at Tougaloo College. During her tenure as a scholar, she has consistently positioned the preservation and promotion of academic pursuits as an underpinning for her every move as a professional. Holding forth a passion for the disenfranchised and dedicated to uncovering the mystique of the non-mainstreamed, Dr. Jackson has focused upon such areas in America as Popular Culture, Black Speculative Fiction, African American theater, and Hip-Hop and popular culture.

Dr. Jackson received the Bachelor of Arts Degree in English from Tougaloo College in 1997, under the mentorship of Dr. Jerry W. Ward, where she was selected as a UNCF/Mellon Fellow.

She earned her graduate degrees from the University of North Carolina at Chapel Hill 1999 (M.A.) and 2004 (Ph.D.), respectively. Her Master’s thesis was entitled “From Heroin to Holloway and Back Again: Donald Goines and the Black Experience Novel.” In 2004, she was awarded the Ph.D. in English from the same institution. Her dissertation, entitled The Literate Pimp: Reclaiming and Revisioning the Pimp-Authored Text, along with the aforementioned thesis, speaks to her ability to think beyond the pale, and it is of no small importance that she was guided through such an unconventional project by scholar and author, Dr. Trudier Harris.

Paralleling Dr. Jackson’s pursuit of academia is her service to education. She has held teaching appointments at Tougaloo College, Southern Illinois University at Edwardsville, and Jackson State University. Her administrative appointments include Director of the Honors Program, Chair of the Department of English, and Assistant Provost at Tougaloo College. She was named a Woodrow Wilson Career Enhancement Fellow in 2007. And she has also served as Provost/Vice President of Academic Affairs and Acting President at Kentucky State University.

Her publications evince eclectic scholarly interests, some of which include “Sinners Have Soul Too: Spirituality in the Secular Text,” Xavier Review; “The Literate Pimp: Robert Beck, Iceberg Slim, and Pimping the African American Novel,” New Essays on the African American Novel from Hurston and Ellison to Morrison and Whitehead; “From Writer to Reader: Popular Black Fiction,” Cambridge History of African American Literature; “The Hand I Fan With: Hand Fans as Sites of Cultural and Racial Memory,” MELUS; “Paradox of Empowerment: “Colonialism, Community, Community, and Criminality in Donald Goines’s Kenyatta Series.” Word Hustle: Critical Essays and Reflections on the Works of Donald Goines; “Asking Aint Getting’: Hattie McDaniel, Butterfly McQueen, and the Re-Making of Margaret Mitchell’s Gone With the Wind.” Black Magnolias: A Literary Journal; “Tougaloo College, Richard Wright, and Me: Teaching Wright to the Millennial Student.” Papers on Language and Literature.

Her current research centers on the works of novelists L. A. Banks and Tananarive Due and an additional project on James Baldwin’s The Evidence of Things Not Seen to be presented at the Les Amis de la Maison Baldwin in Nice, France, in June.

She and her husband, Leon D. Jackson, proudly share a daughter, Lauren, and grandson, Treylon.