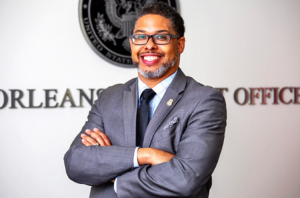 Clifton W. Jeffery, a native of Vicksburg and 2002 graduate of Tougaloo, has been a special agent of the U.S. Department of State’s Diplomatic Security Service since 2007. As a sworn federal law enforcement officer, he is responsible for investigating visa and passport fraud, protecting the U.S. Secretary of State and foreign dignitaries, and protecting official Americans and diplomatic facilities abroad.

Supervisory Special Agent (SSA) Jeffery has previously served in the Houston Field Office and the Boston Field Office. He currently serves as the Resident Agent-in-Charge of the New Orleans Resident Office. In addition to conducting dozens of criminal investigations, he has protected six Secretaries of State and other notable figures.

Internationally, he served in diplomatic missions in Pakistan, Botswana, Iraq, Eritrea and Syria. SSA Jeffery has received several State Department awards and recognitions including a 2011 Heroism Award (https://2009-2017.state.gov/m/ds/rls/205938.htm). In 2019, he was named Diplomatic Security Special Agent of the Year.

He chose to attend Tougaloo because of his interest in a small college where professors and administrators were known for their interest in the success of their students. While a student, he expressed an interest in international relations and although Tougaloo had not previously participated in the Model United Nations Conference in New York, his professors helped assemble a team.  It was SSA Jeffery’s first time in New York and in the United Nations. Fast forward 15 years, he was back there as the agent-in-charge of the former Libyan Foreign Minister Mohamed Taher Siala’s protective detail. Tougaloo planted that seed. He particularly credits Dr. Stephen Rozman’s influence and mentorship. After earning his B.A. in political science at Tougaloo, SSA Jeffery went on to obtain a J.D. from Mississippi College School of Law.

SSA Jeffery is a member of the New Orleans Area Alumni Chapter, a regional representative for the Tougaloo College National Alumni Association, a monthly contributor to the Honorable Eric Holder Endowed Scholarship, a lifetime member of Kappa Alpha Psi Fraternity, a recipient of the Tougaloo College “40 Under 40” recognition and has mentored young people through several programs in cities where he resided.

In September, SSA Jeffery, along with his wife Beverly and four-year-old daughter Kennedy, will move to Washington, DC, where he will undertake ten months of Arabic language training in preparation for his next assignment at the U.S. Embassy in Cairo, Egypt.

This website uses cookies to improve your experience while you navigate through the website. Out of these cookies, the cookies that are categorized as necessary are stored on your browser as they are essential for the working of basic functionalities of the website. We also use third-party cookies that help us analyze and understand how you use this website. These cookies will be stored in your browser only with your consent. You also have the option to opt-out of these cookies. But opting out of some of these cookies may have an effect on your browsing experience.
Necessary Always Enabled
Necessary cookies are absolutely essential for the website to function properly. This category only includes cookies that ensures basic functionalities and security features of the website. These cookies do not store any personal information.
Non-necessary
Any cookies that may not be particularly necessary for the website to function and is used specifically to collect user personal data via analytics, ads, other embedded contents are termed as non-necessary cookies. It is mandatory to procure user consent prior to running these cookies on your website.
SAVE & ACCEPT